Surveen Chawla is an Indian actress and model who comes to the timeline around the subcontinent for appearing in the movie ‘Hate Story 2’. She is a multilingual actress in the India has appeared in various languages movie. Surveen is an actress who is a victim of casting couch in the film industry. She is a popular television personality as well as a movie star.

Surveen Chawla was born on July 16, 1984, in Chandigarh, India. Her father is a business person. At early childhood, she dreamed off to be a doctor but later build up a career in the media industry. Surveen studied commerce in twelve but completed graduation in English from Chandigarh College for Women. She moved to Mumbai in pursuing build up career in acting.

Surveen Chawla kicked off the journey in the media industry with television serial. She made her debut on the television with the serial ‘Kahin To Hoga’ in 2003. Following she appeared in a dance show ‘Ek Khiladi Ek Haseena’ in this show she paired with cricketer Sreesanth. Surveen hosted the comedy show ‘Comedy Circus Ke SuperStars’.

In 2008, she made her debut in the film industry with the Kannada movie ‘Paramesha Panwala’. Then Surveen starred in the Punjabi movie ‘Dharti’. The actress appeared in several Punjabi movies including ‘Taur Mittran Di’, ‘Saadi Love Story’, and ‘Disco Singh’. In 2013, Surveen made her Tamil debut with the movie ‘Moondru Per Moondru Kadhal’. Then she starred in the movie ‘Puthiya Thiruppangal’. Surveen acted in the thriller movie ‘Ugly’ in 2013. She acted lots of successful movie such as ‘Hate Story 2’, ‘Creature 3D’, and ‘Welcome Back’.

Jhalak Dikhla Jaa is a popular dancing show of Colors Channel which has started with season 9. Surveen Chawla showed her terrific dancing skills in the television show. The show is judged by Jacqueline Fernandez, Ganesh Hegde, and Karan Johar.

When Surveen Chawla acted in South Indian film, a director proposed her to go bed; the fact has happened during a Tamil filming, she gave audition for the movie and got the role. But a director proposed for casting couch. The director could not have spoken Hindi, he proposes to the actress by a friend. Director’s friend told the Surveen that she has to go bed with the director until the movie end.

Surveen Chawla faces lots of problems during acting struggling period; she used to live as paying guest in a house. Due to acting work, she would be late to return in the home, for this reason once she gets out from the house.

A rumor ran out about the love relation between Surveen Chawla and Sreesanth during the performing in a reality show. It is reported that they are spotted together in many times. But the rumor turned into a false statement when Sreesanth provide a loving declaration about his wife. Another rumor came out that Surveen dated with Gaurav Chopra. But the couple denied the news having any relationship between them. Surveen’s fake marriage news draws the large the media attention but the actress has no instant plan to marry. 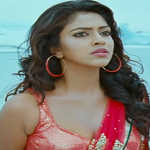