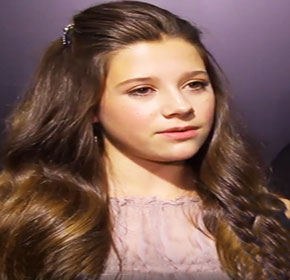 Natasha Calis is a Canadian model and child actress who draws the attention of the audience by her first attempt in the movie industry. She is also performing in the television plays. The actress comes to the timeline when she appeared in the horror movie ‘The Possession’. Now, she is a well-known face in the showbiz world.

Natasha Calis was born on March 27, 1999, in Vancouver, British Columbia, Canada. She was so much passionate about media arena from early life eventually turned her career into the showbiz industry. She started acting when she was only 7 years old.

Natasha Calis kicked off the career journey in the showbiz arena with the television film ‘Christmas Caper’ when she was 7 years old. She draws the attention of audience whilst performed in the movie horror movie ‘The Possession’ directed by Ole Bornedal and with co-actress Kyra Sedgwick. In the movie, she made a tremendous acting performance and notable for playing the role of Emily Brenek, a possessed girl.