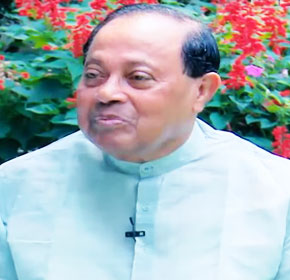 Moudud Ahmed is a well-known Bangladeshi politician and lawyer. He served as Deputy Prime Minister, Prime Minister and Vice President of Bangladesh. Moudud assisted to Ziaur Rahman and Ershad founding their respective political parties. Perhaps he is the only politician who gets the facilities from major two political parties BNP and Jatiyo Party. Finally, he finds his comfort zone in BNP under the leading of Khaleda Zia.  He won the Parliamentary election for five times from Noakhali-5, the same constituency of Obaidul Quader.

Moudud Ahmed was born on May 24, 1940, in Companiganj Upazila, Noakhali during the British Raj. His father Maulana Mamataj Uddin Ahmed was an Islamic scholar and the mother Ambiya Khatun was a housewife. He completed BA and MA from the University of Dhaka in Political Science. In 1966, he was called to the English Bar at Lincoln’s Inn.

Moudud Ahmed was a minister and adviser of Ziaur Rahman government, the first dictator of Bangladesh between 1977 and 1979. He was elected Member of Parliament for the first time in 1979 and became the Deputy Prime Minister. In March 1981, Ziaur Rahman died and Lt General Hussain Muhammad Ershad assumed the power within a year. In 1985, he was elected parliament member again and became the Information Minister.

Again in 1986, he was appointed as Deputy Prime Minister and later Prime Minister in 1988. Ershad appointed him as Vice President in 1989. On December 6, 1986, Ershad gave up power in public disagree. As a candidate of Jatiyo Party, he became parliament member in 1991. Moudud Ahmed joined Bangladesh National Party while Bangladesh Awami League comes to the power in 1996. He also was elected parliament member in 2001 as a candidate of BNP.

In 2007, he was arrested on charges of illegal alcohol possession by the military-backed caretaker government. The case was dismissed by the Supreme Court in 2008. Again he Moudud was arrested by the Sheikh Hasina Government in 2013.

Moudud Ahmed married Hasna Jasimuddin Moudud, a daughter of the renowned Bengali poet Jasimuddin. The couple has three children, among them, Ana Kashfiya Moudud is a poet.