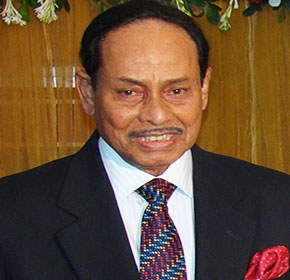 Hussain Muhammad Ershad is a Bangladeshi politician and the founder of the Jatiyo Party. He served as the 10th president of Bangladesh from 1983 to 1990. He seized the power from elected president Abdus Sattar as head of the army by a bloodless coup. He was often criticized around the country for his extra-marital affairs. Although, he was a dictator he was so much success in respect development of the country.

Hussain Muhammad Ershad was born on February 1, 1930, in Dinhata, Coochbehar, West Bengal, India. In 1950, he graduated from the University of Dhaka. Two years later, he was commissioned into the Pakistan Army. Ershad was an adjutant in the East Bengal Regiment in Chittagong. He received an advanced course from the Command and Staff College in 1966. Ershad was appointed in the 3rd East Bengal Regiment in 1969, after serving with a brigade in Sialkot.

HM Ershad kicked off the career journey joining the Pakistan army. He was in Rangpur on vacation during the liberation war of Bangladesh in 1971. But he didn’t take part in the war nevertheless went to Pakistan. In 1973, he returned to Bangladesh along with people who had stuck in Pakistan during the war. In the same year, he was appointed as an adjutant general in the Bangladesh Army. On December 12, he was promoted to Colonel. Ershad became the Deputy Chief of Army Staff by Ziaur Rahman in 1975.

Following the assassination of Ziaur Rahman on May 30, 1981, HM Ershad assumed the power by a bloodless military coup from the elected government of Abdus Sattar. He ruled the country as the Chief Martial Administration by December 11, 1982. He introduced Upazila system in the country and held the first Upazila Parishad Election in 1985. Following the year, he formed the Jatiya Party and elected president for five years getting its nomination.

Bangladesh Awami League and Jamaat-e-Islami took part the election but BNP had boycotted the election. Jatiya Party got the majority in the general election. All the opposition parties boycotted the generational election of 1988 and united these parties along with people protested against the dictatorship of Ershad. Ershad was forced to give up the power on the movement of people.

Losing the power, he was arrested and imprisoned until Awami League comes in power. In the election 1990, he took part from jail and won the five parliamentary seats from Rangpur.  Again he got five seats in the election 1996. On January 9, 1997, he got bail and free from jail. His party emerged as the main opposition party in the 2014 national election and his wife Rowshan Ershad becomes the main opposition leader of Parliament.

Hussain Muhammad Ershad married Rowshan Ershad who elected parliament member for three times. Later he married Bidisha Ershad ended in divorce. He has a son and a daughter by his first wife. It is reported, he had several extra-marital affairs. He was a devotee of the Sufi Pir Atroshi during the presidency, spent considerable time. Ershad passed away at Combined Military Hospital (CMH) at the age of 89 on July 14, 2019, in Dhaka, Bangladesh.