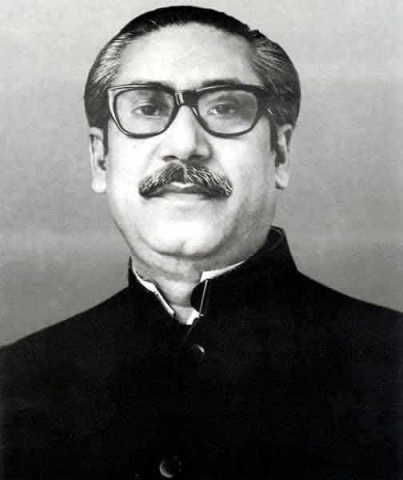 Sheikh Mujibur Rahman was born in Tungipara, a village in Gopalganj District, Bangladesh to the father, Sheikh Lutfur Rahman, and mother, Saira Begum. Mujib’s father was an officer in charge of record-keeping at the Gopalganj civil court. He was the third child in a family of four daughters and two sons. In 1929, Mujib entered class three at Gopalganj Public School, and two years later, class four at Madaripur Islamia High School.

However, Mujib was withdrawn from school in 1934 to undergo eye surgery, and returned to school only after four years, owing to the severity of the surgery and slow recovery. He was enrolled at the University of Dhaka but his studentship was canceled due to a political cause. However, his studentship is given a return again.

A student political leader, Mujib rose in East Pakistani politics and within the ranks of the Awami League as a charismatic and powerful speaker. An advocate of socialism, Mujib became popular for his leadership against the racial and institutional discrimination of Bengalis. He demanded increased regional autonomy and became a fierce enemy of the military rule of Ayub Khan. Mujibur positioned the party Awami League well during the Pakistani period to fight against any Pakistani political party.

Under the leadership of the great leader, Sheikh Mujibur Rahman, Awami League participated in the election of 1970 and got 167 seats. But the party didn’t get the power of the boredom of the ruling military junta. Then mass civil disobedience erupted across East Pakistan and the leader announced Bangladeshis’ struggle for independence through the landmark 7th March speech. The Bengali nation joined in the Liberation War in 1971 for his historical speech that was given on March 07, 1971, at Suhrawardy  Uddayan.

In 1938, at the age of only eighteen, Mujib married Begum Fazilatunnesa. She gave birth to their two daughters—Sheikh Hasina and Sheikh Rehana—and three sons—Sheikh Kamal, Sheikh Jamal, and Sheikh Russel.

In 1966, Sheikh Mujibur Rahman declared a six-point plan at a national conference of opposition political parties at Lahore, which conveyed the independence of Bangladesh through the 1971 Liberation War.

1- Pakistan would have a federal structure of government based on the sense of the Lahore Resolution of 1940, with a parliament elected on the foundation of the universal adult franchise;

2- The federal government would have authority only in defense and foreign affairs and all other subjects would be operated by the federating units of the state of Pakistan;

3- There would be two freely exchangeable currencies for the two wings of Pakistan or two separate reserve banks for the two regions of the state;

4- The power of taxation and revenue collection would be vested in the federating units and the federal center will have no such authority. The Federation will be entitled to a share in the state taxes to meet its expenses;

5- There would be two separate accounts for overseas exchange reserves for the two wings;

6- East Pakistan would have a separate militia or paramilitary force.

Bangabandhu Sheikh Mujibur Rahman declared the Independence of Bangladesh on March 26, 1971. He was arrested on March 25, 1971, from Dhanmondi 32 no. house and taken to West Pakistan after midnight and kept under heavy guard in a jail near Faisalabad.

A group of junior army officers invaded the presidential residence at Dhanmondi 32 on August 15, 1975, and killed the father of the Bengali Nation Bangabandhu Sheikh Mujibur Rahman, his family, and his personal stuff. Only Rahman’s two daughters Sheikh Hasina Wajed and Sheikh Rehana escaped as they were visiting West Germany.