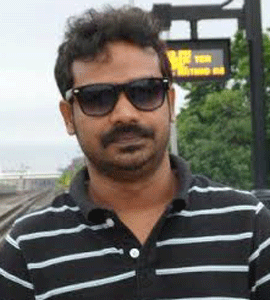 Himu Akram is what a quality scriptwriter & director! That you can’t imagine easily without enjoying his directed drama and add film. He has been working as a famous director in the showbiz arena of Bangladesh since 2005. Himu Akram is such a brilliant director who already has proved his intelligence as a director in the various dramas and add film. He is an excellent small-screen director as well as a successful TV commercial director.

Himu Akram was born on September 21, 1985, to Mohammed Abul Hossain and  Begum Rahima Akter at grandparent’s house in Noakhali, Bangladesh. Himu’s father and mother were a school teacher. He has two brothers, Amzad Hossain and Anower Hossain. Amzad Hossain is a teacher and Anower Hossain is a textile engineer. Himu spent his childhood at the suburb of Maijdi. He had an unquenchable thirst for reading. So, he spent half his time in the public library. Himu read everything, starting from Humayun Ahmed to Maxim Gorki. All this reading made him fail his exams even! Himu ran away twice, so he wouldn’t have to face his family.

Himu came to Dhaka from home district to build up a career in any working sector, rather turned himself into a country famous director.

Himu Akram is a popular single drama and drama serial director who started a career journey in the showbiz arena with the stage show. Himu Akram made his debut in the add film industry with the TVC  keya detergent powder in 2007. Himu came to limelight around the country when directed in the drama ‘’Morche Pora Shikol’’ and the drama got success as well as Himu was highly praised for brilliant direction quality. Himu Akram is well-known for his comedian script and direction in the dramas. Akram’s debut drama is golmal was telecasted in 2008. He showed his terrific direction in the drama serial Zoinal Jadukor and got numerous admiration from all types of audiences. Himu Akram’s written and directed drama is Sagar Dakiche Tare, Managing Director, Sajahaner Tin Din, Mokbul Enterprise, Jolchap, Tahara Sonnassi, Jori Banur Sukher Golpo, Poncho Premik, Nojir Bihin Nojor Ali, Gentleman Suruj, Dhandabaj, Palki, and Tipu Sultaner Hati etc.

‘Opekhkha’ was his first story that was published in Jayjaydin. Then the flow started. He wrote many accolades for his writings. A few of them to name Sesh Bikale Ami, Joltarnga, Lampost er Niche, Sedin Mech Chhilo Na, Ghunpoka, Kichu Jol Kichu Sunnota Ghire, Se Rate Bristi Chilo and Jeona, etc.