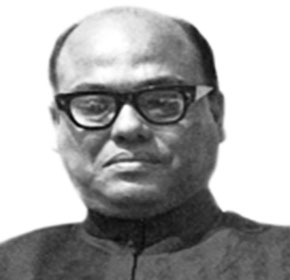 Syed Nazrul Islam was born in 1925, at Jashodal Dampara, Kishoreganj (then Mymensingh). He was so much talented received degrees in History and Law from the University of Dhaka. Nazrul was active in student politics and leader of Muslim League. He was good in sports eventually played a role as captain in the college cricket and hockey team. Syed joined in the Pakistan movement.

After completing education, Syed Nazrul Islam joined the civil service of Pakistan in 1949. But he resigned from the job in 1951 in pursuing to work as a professor. Then he started teaching profession as a history teacher at the Anandmohan College in Mymensingh and practiced law.

Syed Nazrul Islam’s mainstream political career started when joined the Awami Muslim League and took part in the Language Movement in 1952. He was arrested by Pakistani police for joining the Language Movement. Syed became closer to the party leader Sheikh Mujibur Rahman and jailed for Six Point Demand Movement. In 1970, he was elected to the National Assembly of Pakistan.

Syed Nazrul Islam played the key role in the liberation war of Bangladesh coordinating the Mukti Bahini, winning Indian support as well as other nations. After getting independence, he was appointed as minister of industries. When Sheikh Mujibur Rahman banned other political parties in 1975 and assumed sweeping power as president he was Vice-Chairman of the BAKSAL.

After the assassination of Bengali father of nation Sheikh Mujibur Rahman on August 15, 1975, he was confined.  On August 23, 1975, Syed was arrested with other Sheikh Mujibur’s loyalists – Tajuddin Ahmad, Qamaruzzaman and Muhammad Mansur Ali by the regime of the new president Khondaker Mostaq Ahmad and imprisoned in the Dhaka Central Jail. On November 3, 1975, he was assassinated brutally under controversial circumstances. He was buried at Banani graveyard.  Every year, the day is commemorated as Jail Killing Day across the country with due honor.

The Minister of Public Administration and Member of Parliament Sayed Ashraful Islam is his son. The government established Shahid Syed Nazrul Islam Medical College in Kishoreganj as his honor.