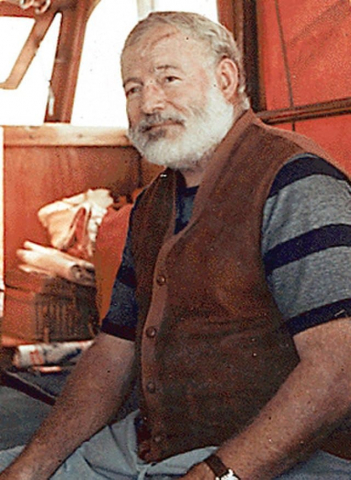 Novel prize winner Ernest Miller Hemingway was an American great novelist, story writer, and journalist. He took part in the First World War as an ambulance driver, also without this profession, Hemingway was a powerful writer. Hemingway wrote two great literary works in American history A Farewell to Arms and The Old Man and the Sea.

He was born on July 21, 1899, in Oak Park, a Chicago suburb. His father was a doctor and his mother was a musician, Hemingway was the second of six children. He was named after his maternal grandfather’s name but later he didn’t like his name.

Ernest Hemingway started a career as a journalist, joining the Kansas City Star as a cub reporter in 1917. Following the year, he volunteered to work as an ambulance driver on the Italian front where he was badly wounded.  In 1919, Hemingway returned to America, and two years later he married.

Following the year, he reported on the Greco-Turkish war, and then two years later resigned from journalist to devote himself to fiction. In Paris, he renewed his previous friendship with such fellow-American expatriates as Gertrude Stein and Ezra Pound. Their encouragement and criticism were to play a vital role in the formation of his style.

At first, he published three stories Ten Poems, and a satirical novel In Our Time. Hemingway’s next published works Torrents of Springs established his name widely in the United State but he got international recognition by publishing Fiesta, Men Without Women, and A Farewell to Arms which he wrote out of First World War experience.

Ernest Hemingway visited Spain during the Civil War and described his experience in For Whom the Bell Tolls which was a bestseller. He was passionately involved with bullfighting, deep-sea fishing, and big-game hunting, and Hemingway’s writing portrays his experience. In 1954, he was awarded the Novel Prize for Literature for the publication of The Old Man and the Sea.