Wiam Dahmani is a Moroccan actress, TV presenter and singer living mainly in Dubai, UAE. She is an international face working mostly in Pakistan, UAE, and India. Wiam Dahmani is very much glamorous, appealing and enthusiastic,  now performing in the showbiz industry with full swing.

Wiam Dahmani was born on August 18, 1983, in Rabat, Morocco to Muslim parents Omar Dahmani and Tahra Bennani. She is an educated actress completing Bachelor degree from New York Film Institute in Dubai. From her early childhood, Wiam was a passionate fan of the media industry.

Wiam Dahmani kicked off her career as a presenter in Dubai TV, one of the National Television Channels of UAE in 2010. Then, she entered into the field of singing and made video clips ‘Welcome’ in the same year. After releasing that video, she presented few other popular videos including ‘Sajnawy’, ‘Wow’, ‘Mi Or That’, all of those were in the Arabic language.

The multi-talented actress entered into the film industry making her debut with the movie ‘Ishq Khuda’ alongside Shaan Shahid, Meera and Ahsan Khan in 2013. It was a Pakistani Punjabi language romantic movie which was directed by Shahzad Rafique and produced by Shafquat Chaudhry, the movie got a big hit. Her second movie is ‘Hotal’ directed by Khalid Hasan Khan and the movie was released in Lollywood as well as Bollywood in 2014. The movie is called the first Pakistani Psycho-Thriller Feature Film. Then, she appeared in ‘Hijrat’ with Rabia Butt and Sana Nawaz another romantic movie based on Afghan War which was released on April 22, 2016. Her excellence performance in the three movies has been appreciated by the cinema critics and her fans.

The romantic actress also appeared as a host in several programs. She is now working in her upcoming movies and also in several television commercials.

There is a mystery of Wiam Dahmani personal life because it is not clear that is she married or not. But she is very devoted to her career. 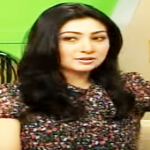