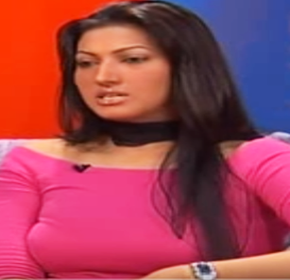 Sana Nawaz is one of the most talented actresses and famous models of Pakistan. She is considered as a paragon of beauty in the showbiz industry. The beautiful actress got the leading position in the Lollywood by her excellence performance. She is innovative, enterprising; amazing and extraordinarily hard working for those qualities she has remained in the bright mark of the Pakistan showbiz industry.

Sana Nawaz was born on July 26, 1979, in Multan, Punjab, Pakistan. She was very much passionate about the models and actresses of Pakistan. So, it was her passion to become a model and actress. Her mother supported the actress turned the dream into reality in the Pakistan media.

Sana Nawaz kicked off career journey as a television actress by the help of Shafique Husain, an assistant director of PTV and a relative of her mother. She made her debut in Lollywood film industry with the movie ‘Sangam’ directed by Syed Noor in 1997. Next, the actress appeared in the movie ‘Choonia’ by the same director and the movie became hit. The movie raised a storm in the Lollywood and the cinema critics considered it as a super hit film in Pakistan. In 2002, the super actress presented ‘Yeh Dil Aap Ka Huwa’ which also became a big hit.

Sana made her Bollywood debut with the movie ‘Kaafila’ in 2007 by the direction of Amitoj Mann. The movie is considerably reached her as one of the top actresses in the film industry. Sana Nawaz has also faced to troubles because of film ‘Ishaq Be Parwah’ was released in January 2009 which got negative reviews. Cinema critics accused Sana of capricious performance in the movie.

However, in the next 5 years, Sana has presented some popular movies to her fans and now the glamorous actress is going to do a big budget movie ‘100 Crore’ in 2017.

Sana Nawaz, the sensational actress engaged to Fakhar Imam on July 15, 2007. Fakhar Imam is also a model and actor. They happily married on December 13, 2008, in a gorgeous marriage ceremony. Sana has given birth to a child as the result of her happy conjugal life.