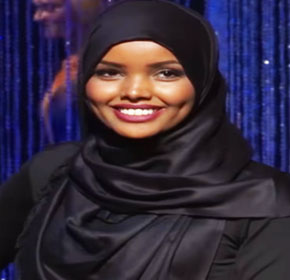 Halima Aden is American model who is the first Somali-American to compete in the beauty pageant in the United States.  She is the ever first hijab-wearing model widely draws the attention of American people. Aden participated in the Miss Minnesota USA pageant and became the semi-finalist. She was signed to IMG Models, an international model management firm and draws the national attention.

Halima Aden was born on September 19, 1997, in a refugee camp, Kenya. She moved to the United States at six years old. Her classmates voted her as homecoming queen. Now, she is studying at St. Cloud State University.

Halima Aden kicked off the modeling journey appearing in the Miss Minnesota USA pageant as maiden African-American wearing hijab that indicates the diversification of modeling industry. In 2017, Aden appeared at the New York Fashion Week for Season 5. Miss Universe Organization released a press that Halima is the first woman to compete in the Miss USA pageant wearing a hijab and burkini.

In the Miss Minnesota pageant 2016, she placed in the top 15. She also posed for several brands like American Eagle as well as for some fashion magazine – British Glamour and CR Fashion Book Cover. Aden is the first woman who walks the international runway wearing hijab. Aden as a first black ancestry model signed with major agencies in the United States. She became the first hijab-wearing model on Allure cover and Vogue Arabia’s cover in 2017.